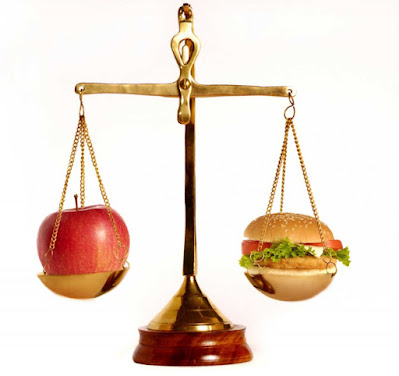 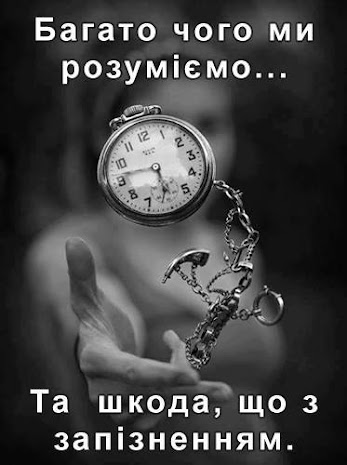 John Cena: The Champ is Here

For years in professional wrestling there have always been two main ingredients to being a star. Your in the ring work ethic, and of course your microphone ability, or "mic skills."

All you have to do is look back to the golden days of wrestling (even further back than the old NWA) and you'll see that the wrestlers that captivated audiences were the ones that could convince you to spend money on a ticket to the show. Some were good at it, few were great. The list is not so long, but a virtual who's who, of wrestling; John Tolos, Black Gorman and Goliath, Jesse "The Body" Ventura, "Nature Boy" Ric Flair, Rowdy Roddy Piper, The Rock, and Stone Cold Steve Austin. All of these men were great when it came to hyping a match or feud, or just getting a crowd fired up for the night's main event.

John Cena, the current WWE Champion, fresh of his victory at Wrestlemania 21, is the newest (and best) "mic man" in the biz.

Not only can he hype a match, or shoot an interview with the best of them, but he is also diving into the music world with a rap album ("You Can't See Me") that will be released on May 10th. Now this won't be anything like the one Hulk Hogan put out a while back with songs like The Hulkster in Heaven. This one is really good.

In fact you can hear a sample of Cena's work in his ring entrance song every time he enters the ring. At a recent music video shoot for his song, Bad, Bad Man, I spoke with Cena about who he'd like to face in the ring, who designed the new look of the WWE title and what he thinks of Vince McMahon.

IGN Sports: Is there anyone you'd like to face in the ring that you haven't yet?

John Cena: That's a good question. I'd like to see what Randy Orton can do, Randy Orton and Batista. I had a few brief moments with Batista in the Royal Rumble and I'd like for that to be a match and I'm sure the fans would love to see it.

IGN Sports: Did you and Batista or Randy, didn't you guys square off in Ohio Valley?

John Cena: Yeah, we squared off a couple of times and that's why I think not only would I love to have that match, but I think the fans would like to see it, almost like a new crop in the WWE coming full circle.

John Cena: The Smackdown main event would be a handicap match with John Bradshaw Layfield and his cabinet vs. John Cena and the People's Champion, The Rock. The Raw main event....whew, that's a tough one. You know what, I wouldn't mind seeing Triple H and Ric Flair go against Batista and Hulk Hogan.

IGN Sports: I just got a look at the new WWE title. Do you know if it's a Reggie Parks original or if someone else designed it? 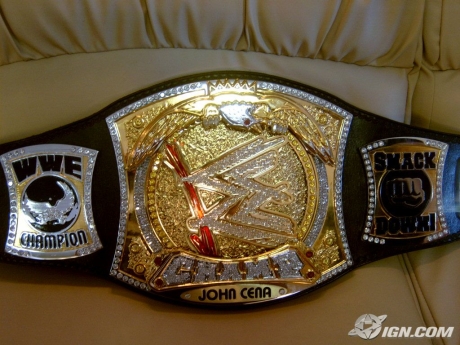 John Cena: It's straight through J-mar, J-mar has done WWE belts and continues to do WWE belts. I'm kind of testing the knowledge and trying to bend as much as I can without breaking their levels of difficulty in designing the belt. I came up with the design not only with that [WWE title] belt but the U.S. title as well, and its completely different from what they've done in the past, so I'm really trying to stretch their limitations as far as craftsmanship, as far as what the belt is made of. Not just regular stones as far as cut diamonds, materials from diamonds, materials as far as not just gold, platinum, silver all that stuff, we're trying to really use all our avenues, I'm really trying to make that design the classiest, best belt possible.

IGN Sports: So did the Ultimate Warrior and Steve Austin, did they have a say in creating their belts?

John Cena: You'd have to, I'm sure as far as Steve and the smoking skull, you'd have to think he was in on that and designing that belt. I took a chance with the U.S. title because my reign was so long and kept so low under the radar that I really wanted to bring a little prestige back to the title. I know a lot of people thought what I did was disrespectful to the title, but in the same sense, when you pan across the Smackdown audience and see more U.S. title spinner signs than you see WWE title signs, you're getting a lot of respect. You know the traditionalists have their view but at the same time what I did worked. So with that in mind knowing I had the biggest match of my career for the biggest title in the game, I wanted to see if I could stretch the limitations of the world title, the WWE championship.

IGN Sports: Who was your favorite wrestler growing up?

IGN Sports: Have you had a chance to talk to him?

John Cena: I have, I've had a couple of chances to talk to him and tell him not only what he meant to wrestling but what he meant to me personally...I wouldn't be here today if it wasn't for Hulk Hogan, I wouldn't be doing any of this. He got me watching as a child and kept me watching up until the day I got to step into the ring. And even still, when he does anything with our program or for our program it's something that I still tune into because I have that long-time connection with him.

IGN Sports: Would you like to see yourself teaming up with him, or even facing him? 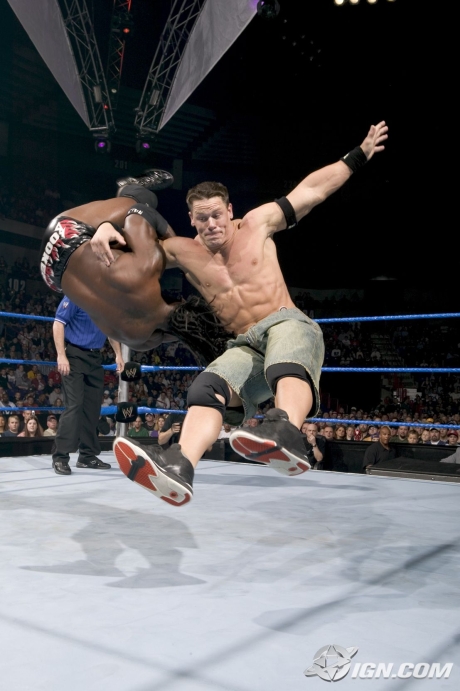 IGN Sports: I also read that you're a Madden fan?

John Cena: Yes. I haven't had a chance to go to into 05, but I'm on year 16 of my dynasty right now and I don't get a lot of chances to play. I'm waiting for PSP to come up with a Madden, maybe then I'll spring for a PSP and try it out. I tried out Tiger Woods on the PSP and it's phenomenal. But I'm a Madden and a Tiger Wood's fan; these are the two games I play a lot. Yeah I can't get enough of Madden '04, and I'm not gonna stop until my dynasty is over. I've got to go for 30 years.

IGN Sports: So does that mean you're a creature of habit?

John Cena: Indeed, it also means I have a knack for the classics. Madden is a franchise name, it's a franchise game. As far as having a knack for the classics, I still fire up the 8-bit. I love 8-bit Nintendo, I still fire up the 8-bit all the time. We play Tecmo Super Bowl, we play Pro-Wrestling, Super Mario Brothers, the original, Gradius, Akari Warriors, Contra, Punch out, a lot of originals we play, you know what I'm saying, I'd rather spend more time playing that, than playing Playstation.

IGN Sports: Where does the "You can't see me!" come from?

John Cena: Believe it or not that's a joke on my little brother, just like word life, word life is a joke on my cousin. Whenever we would freestyle, before I really actually got into rap music, we would freestyle that's what I did, that's what I still do, and whenever my cousin would get stuck, he'd say word life. It was like a filler word. Everyone's got their filler word, he says word life, and one of these days, I said, watch on tv I'm going to make fun of you. So I did one of those freestyles and afterwards I really over emphasized, WORD LIFE! And they [WWE] said "oh we loved it, the people loved it, keep saying it, keep saying it". So not only did I keep saying it but it has been my namesake, my moniker for a year and a half. As far is "You can't see me", my brother Sean, when we freestyle he kind of messes around, he'll put on a beat, he'll do his thing or do whatever, and he and a couple buddies of his were doing this thing right here (covers his face) and I'm like man I gotta put that on TV, so I couldn't do this (covers face again) cause no one would see my face. So his name is Sean but we call him Boog, I said Boog watch TV I'm going to make fun of you. So I did the you can't see me thing, its kind of a mortified [version] you know, I just waved my hand in front of my face, and it was a joke to him but it was a thing that was heartfelt and caught on.

IGN Sports: Besides the "F-U", what, in your opinion, is the best finishing move in wrestling?

John Cena: Best finishing move in wrestling...I'm a big fan of the Tombstone, its one of the most devastating finishers I've ever seen. What's another great one, the choke slam is tried and true, because its been used by more than one person, I know from experience that the Clothesline from Hell is a mother ****, that's probably the strongest finish in professional wrestling...that's a good top three right there. I'd say the Tombstone, the choke slam, and I gotta give respect where respect is due…the Clothesline from Hell.

IGN Sports: What was it like being part of the 2005 Superstar Challenge?

John Cena: I've been in the Superstar Challenge ever since there was a Superstar Challenge. I look forward to that event, even though that for this year it was on Xbox, and I'm not really an Xbox guy. The THQ game engines are really made for people who really enjoy the wrestling games and I really don't have that much time to sit down and get experienced in the wrestling games, as far as really adapt to the game playing. You really have to know what your doing...it's not a button bashing game, so I'm not as good as I should be, but at the same time I really get fired up for the Superstar Challenge. It was great this year. 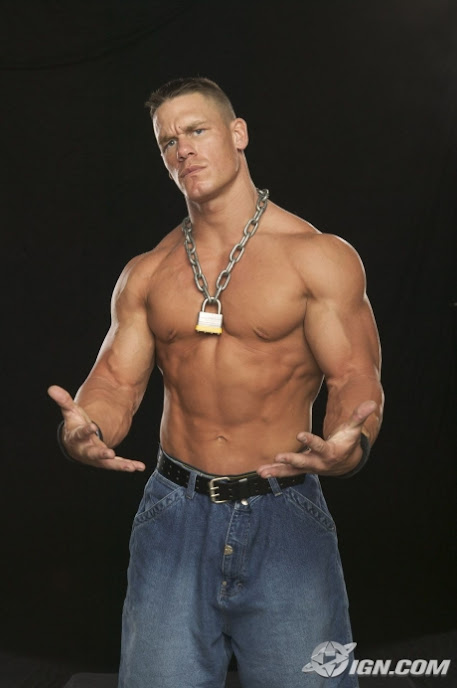 IGN Sports: What's your favorite arena to wrestle in? 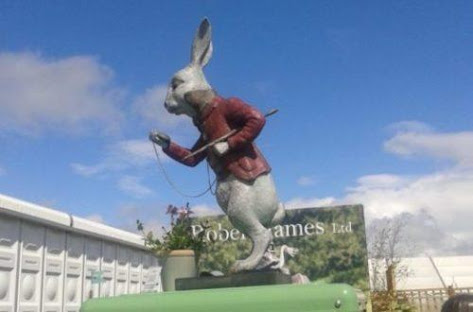 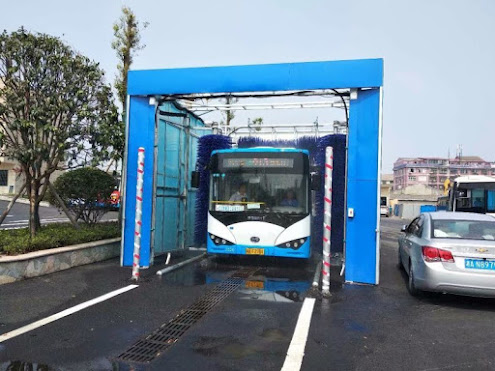 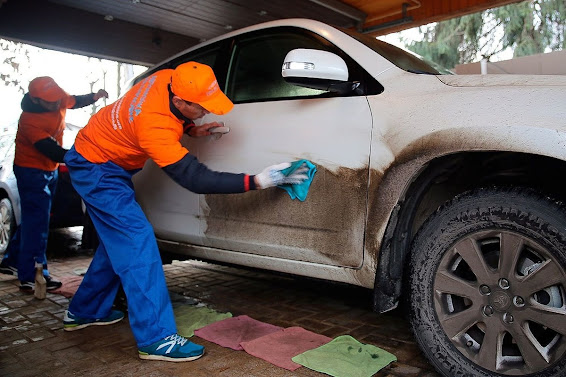 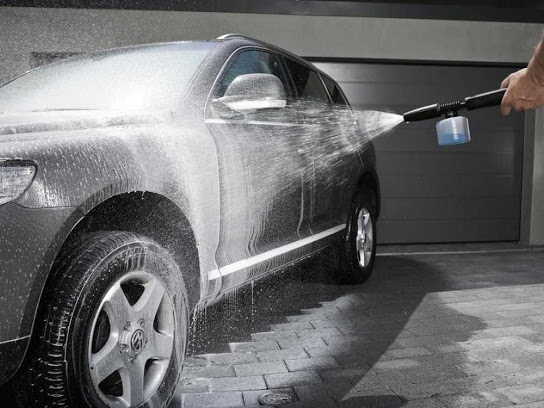